A while back, a group of us found our way to Ngare Ndare. It wasn’t by chance but it turned out to be a wholesome experience that I didn’t know I needed. The story of Ngare Ndare, starts with a photo of a man standing in a field of flowers…

Early this year, I saw this beautiful image of Mutua Matheka, on Twitter. He was standing in a field of canola, wearing a tshirt the colour of canola with his face and dreadlocks offering a beautiful contrast.

Over the weekend we went to the North to look for Grevy Zebras for #GGR2018. We didn’t see any ???? as it was too dry and most had migrated to neighboring areas but on the way back @mamaya4 took some portraits of me in a Canola field in Timau and I like em. Please go check out her work. . #makePortraits #OnetouchLive #OnetouchLive_Grevys

In my photo, I’d wear a billowy skirt that would flow past my ankles, never mind that no one would see it, buried as it would be, in a field of canola. My torso and everything else above it would be more… structured. I’d have spaghetti straps on my shoulders and hair the colour of wheat. I would be a flower child; I’d get lost in that field and find myself with the sun on my back and a sea of yellow in front of me, waiting for my word so it can rise and maybe fall. 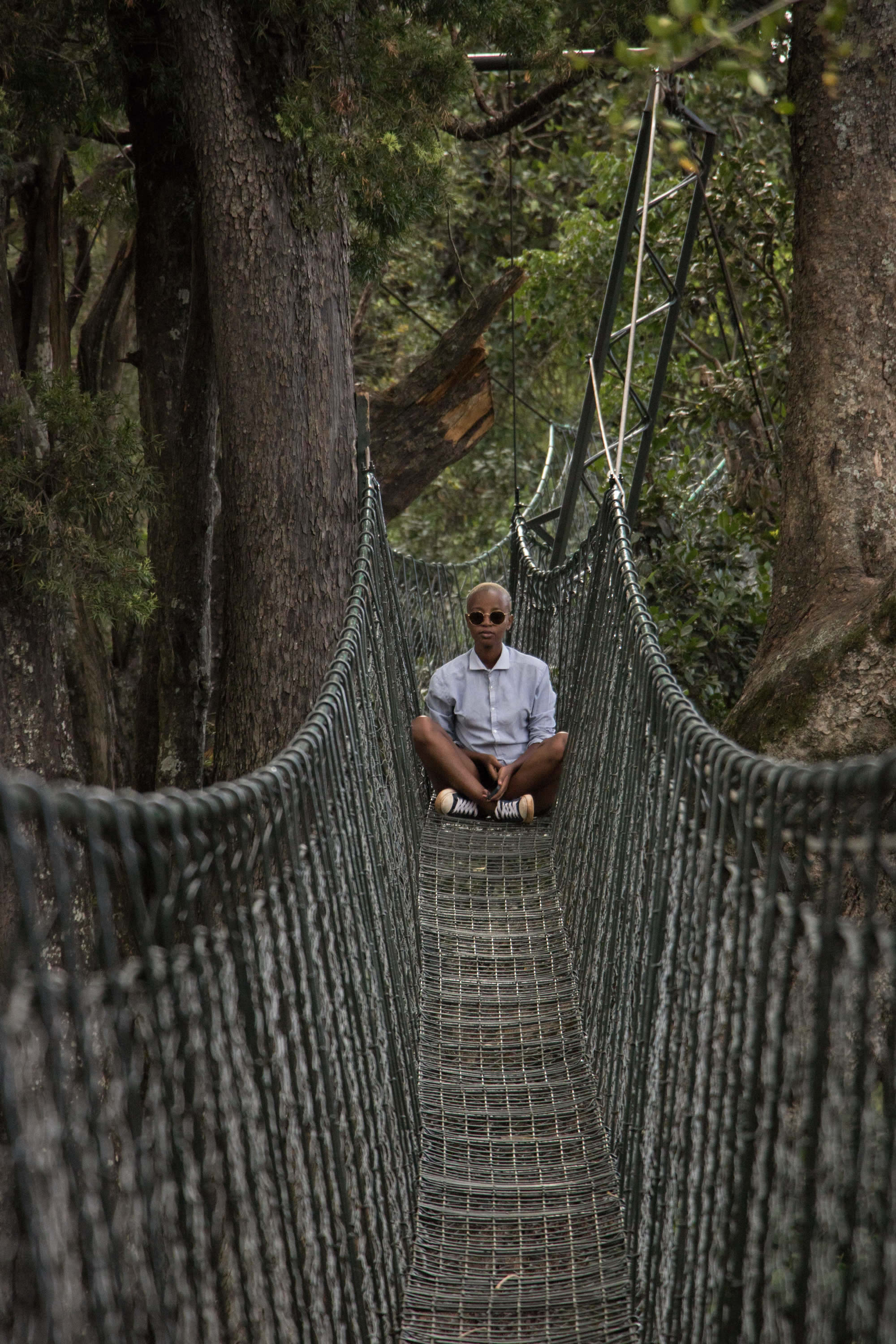 On the 4th of February I found myself seated in the backseat of a car, sandwiched between the thighs of friends, driving down Timau, with fields of wheat waving us by. This almost perfect Sunday would be the day to get my ‘Mutua Matheka’ shot. That photo would never be taken.

I had been dying to go to Nanyuki for the longest time. I’d taken this desire seriously and made plans with one Miss Kadzitu but those plans had eventually been shelved, because, life. Well, until this particular Friday morning as I was leaving the house for work, she texted,
‘Where are you?’

Leaving the house. What’s up?

That evening found us in Nanyuki, with the loveliest of hosts. This was a work trip but that wasn’t going to prevent a little play. After David, our host, had gotten a little accustomed to my bad jokes, I showed him the Mutua Matheka photo. He knew exactly where to find the canola, it was out of the way. But… we planned on visiting Ngare Ndare for the play part of the trip and if we passed through Lewa on our way there, I’d get my wish.

On the day of, I ditched the skirt for short shorts, a boy’s shirt and sneakers. That should’ve been the first sign that this photo wouldn’t be taken, but no, a girl still had hopes. Then we got into the car and I was wowed and wowed and wowed by the beauty of the countryside, I put my phone and just, took it in. All around us was Timau and endless fields of golden wheat. In that moment, it was the most gorgeous thing I had ever seen so it was enough for me when we got to the canola fields and the flowers were no more; they’d been harvested.

A photo should capture a moment, it doesn’t always do that though but sometimes, we’re lucky enough to have moments captured in photos. 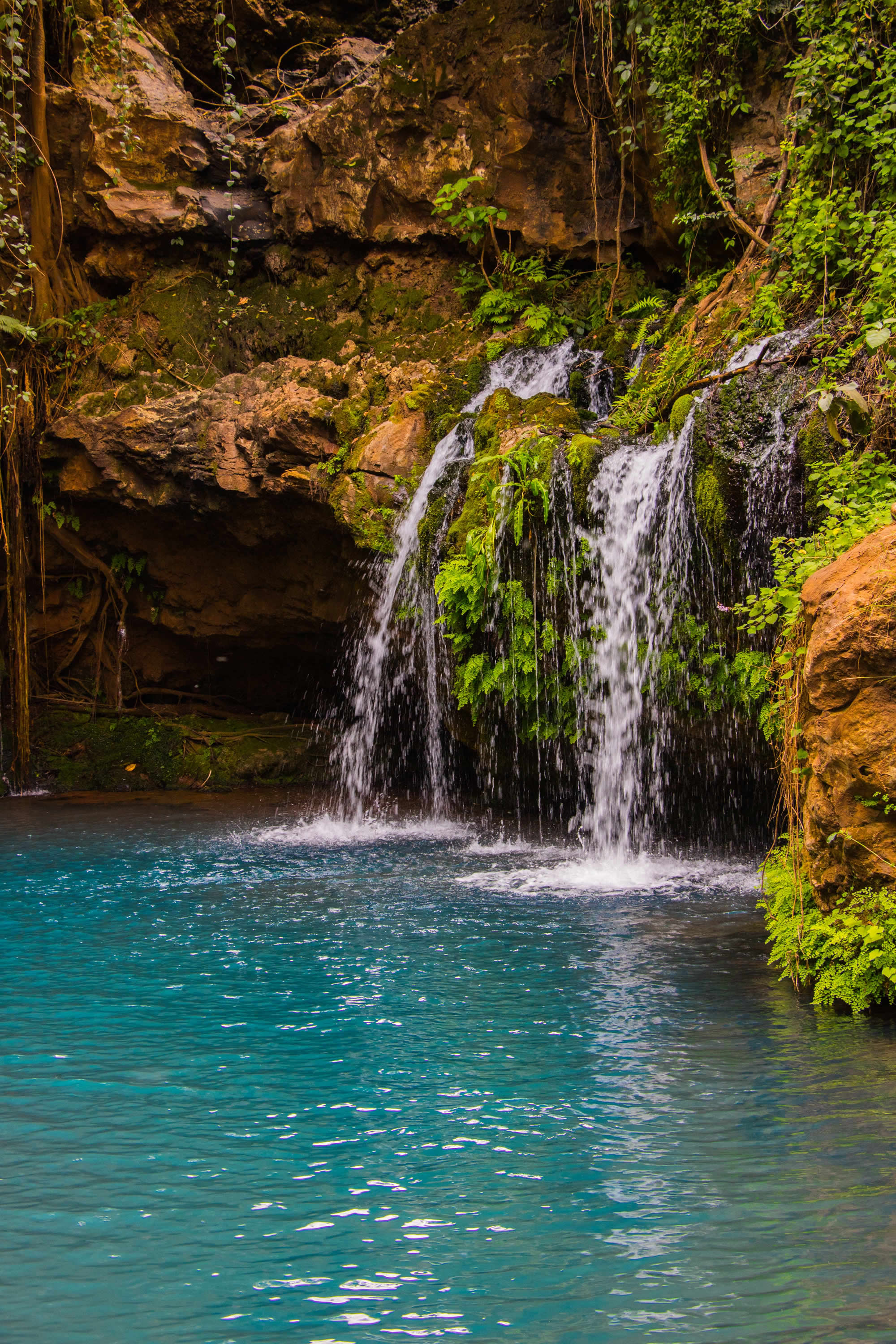 After missing my canola shot, we drove through Lewa Wildlife Conservancy to Ngare Ndare Forest, like we’d planned to. David says Ngare Ndare is named after goats and water and while I saw no goats, I saw water. Lots of clean, blue water flowing downstream, not that water ever flows upstream. But before there was water, there was a hike.

Ngare Ndare is three things; pools of meltwater from Mount Kenya, a hike and a canopy walk. If you’re lucky enough, you will get to watch elephants walk beneath you (on the canopy walk ) but we weren’t so fortunate. In fact, we found it crowded with people and opted to go to the pools first, in the hopes that by the time we got back, we’d find it deserted.

There are two options; you could drive to the pools or you could hike there. It’s not too far away, but it was hella dusty so we choose to drive there like the spoilt city people we were. Nature doesn’t really give a hoot about pampered asses, as we soon came to find out.

There’s only so far that a car can go in Ngare Ndare. Soon we had to ditch comfort for Miss Kadzitu’s occasional screams as she worried about bumping into wild animals (thanks for the scare David). We never bumped into any, thankfully, but we had the most chilled hike, more like a walk against the flow of the Ngare Ndare River and it was the most serene experience. Suddenly, this group of 5 mad ones had lost its collective tongue and we were… I want to say one with nature, but that cliché doesn’t quite cover it. Everyone was lost in their own thoughts yet still aware of the others’ existence. There was no labored breathing, there was no excitement, there was no rush, I believe there was peace. 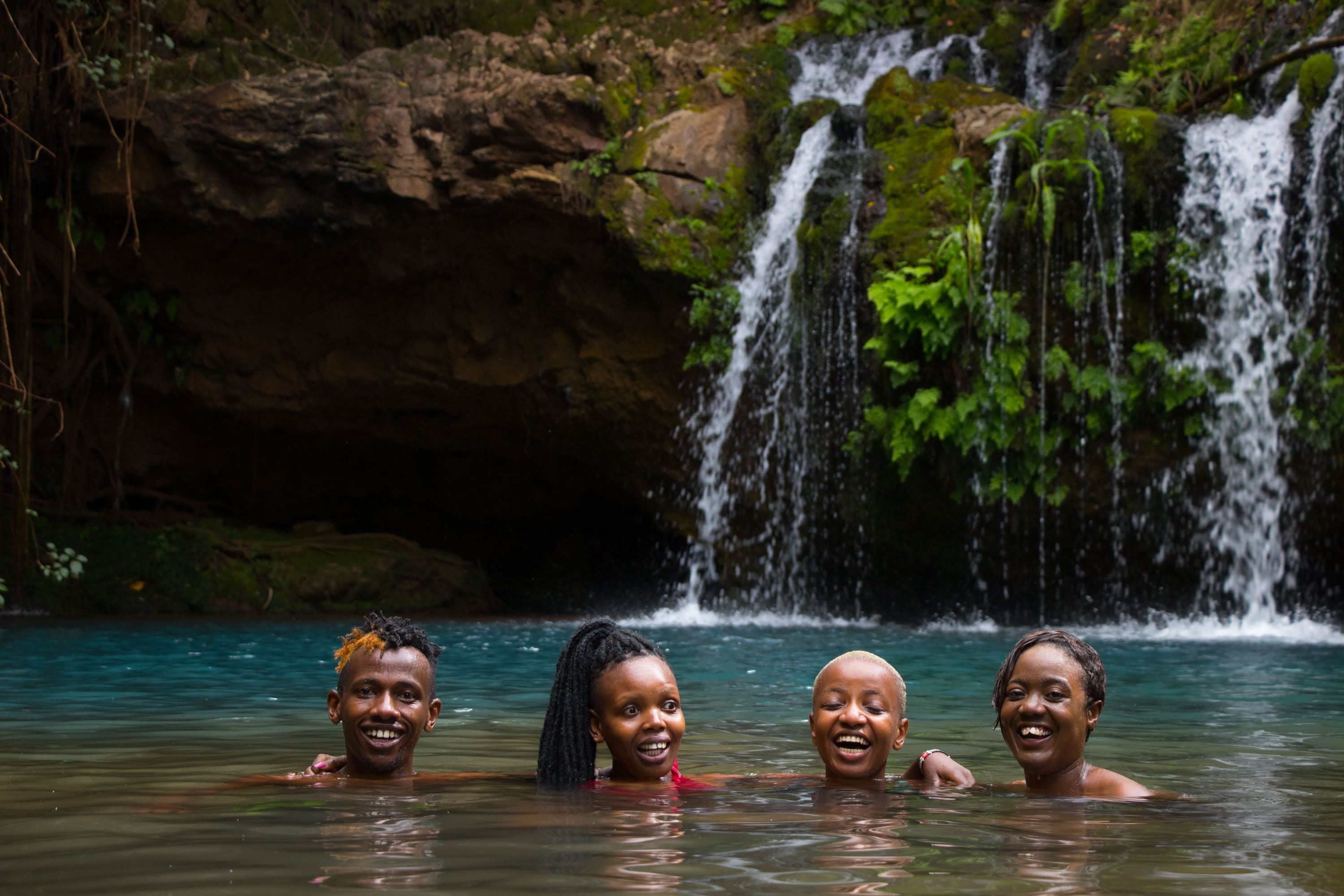 But soon this feeling of serenity broke as we got to the second and bigger pool. The water here is just as clean as what we had been walking against but it runs deep and with this deepness comes a blue so true, it can only be compared to Monday blues, or not… We gushed over it. Then we ran behind bushes and rocks, to change into our swimsuits. This part of the experience is not for the shy ones but it’s all worth it once you dip into the water. Alternatively, wear your swimsuit under your clothes. 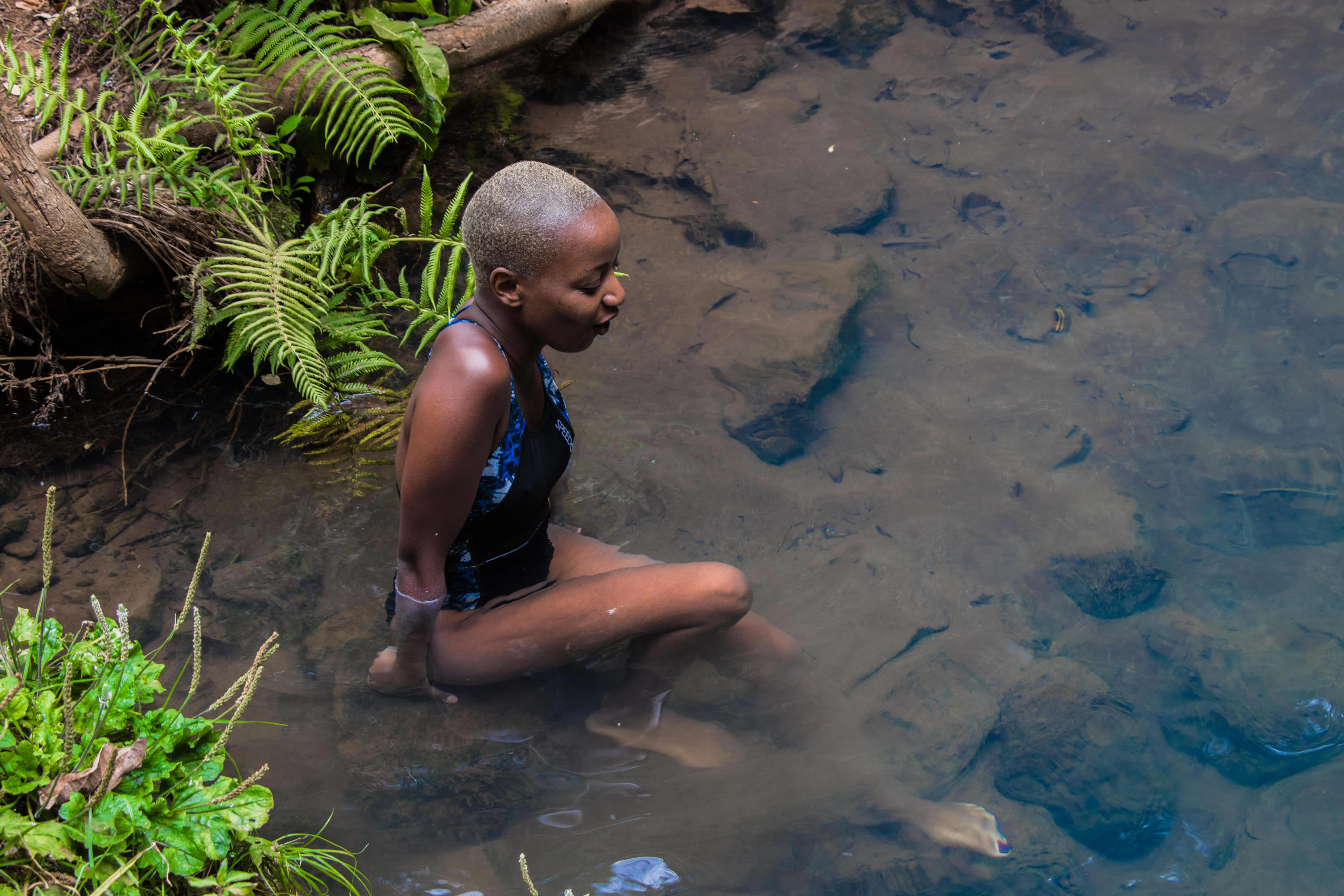 Boarding school showers have nothing on the cold that is Ngare Ndare water. It is melt water after all and sitting in it, I remember thinking ‘by the way si lazima’ but once you’ve dipped a leg, you might as well throw the rest of you into the damn thing! So we did. 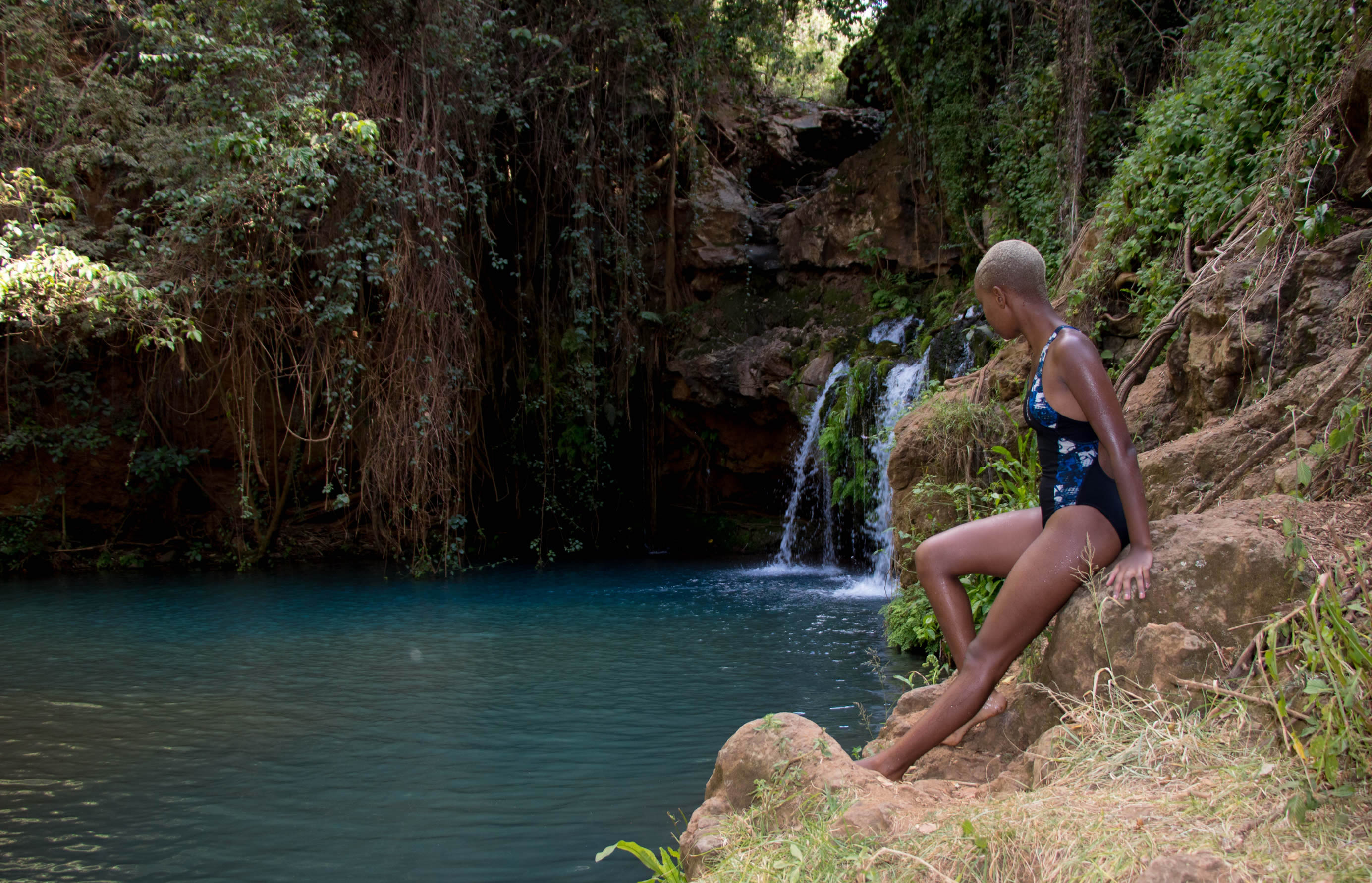 We swam and Gathoni dipped her braids into the water and threw the most beautiful shower and for a minute I regretted cutting my hair. We might have had to sweet talk a babe into joining us, but Ngartia was busy recreating a photo he had taken a few years back in Dar, or was it Zanzibar? 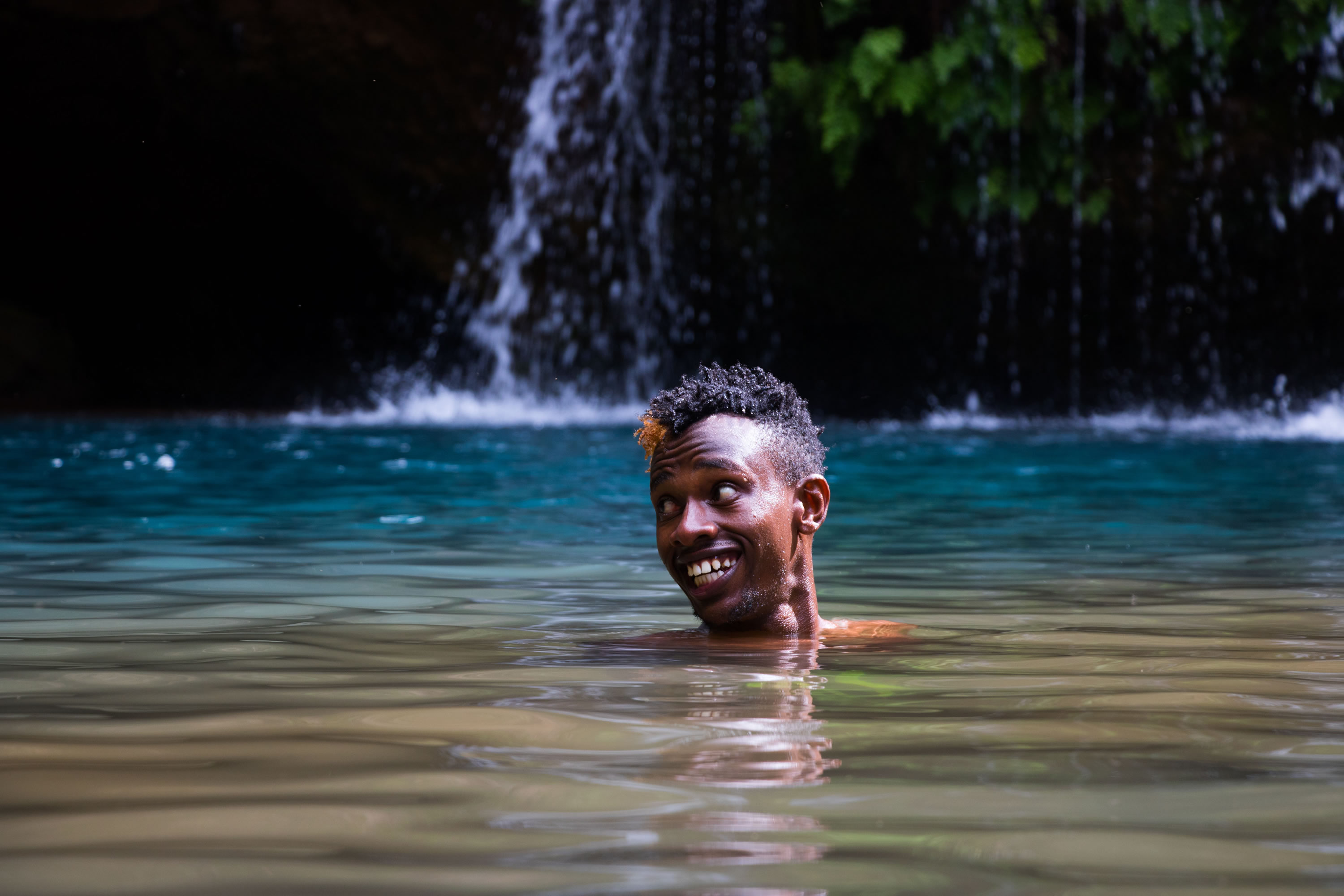 David though? Dude has been to Ngare Ndare so many times he wasn’t even fazed. (which is great, otherwise there’d be no photos to post.)

The crowd that we’d been avoiding before finally made it to the pool and we took that as our cue to leave. 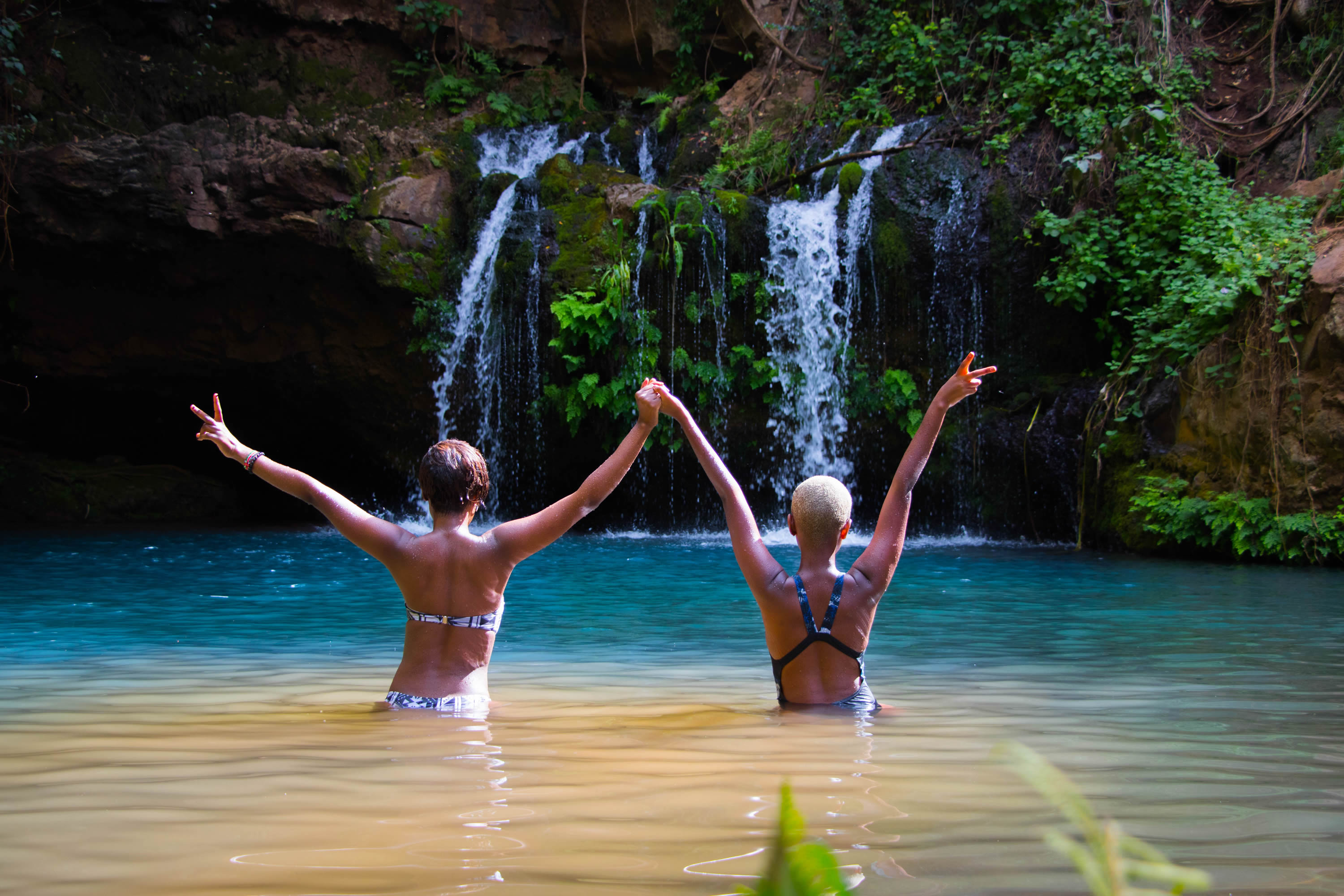 Swimming before doing the longest canopy walk  in East Africa was definitely a good idea. Were we ashy? Definitely! But we warmed up in the sun and walking on that canopy was amazing.

It’s about 80ft high. If you’re afraid of heights, our resident screamer, the babest babe alias Miss Kadzitu, might have a few words of comfort for you. She might also tell you to stay away from that thing but if you are planning on going to Ngare Ndare, do it with friends- it’s loads of fun that way. 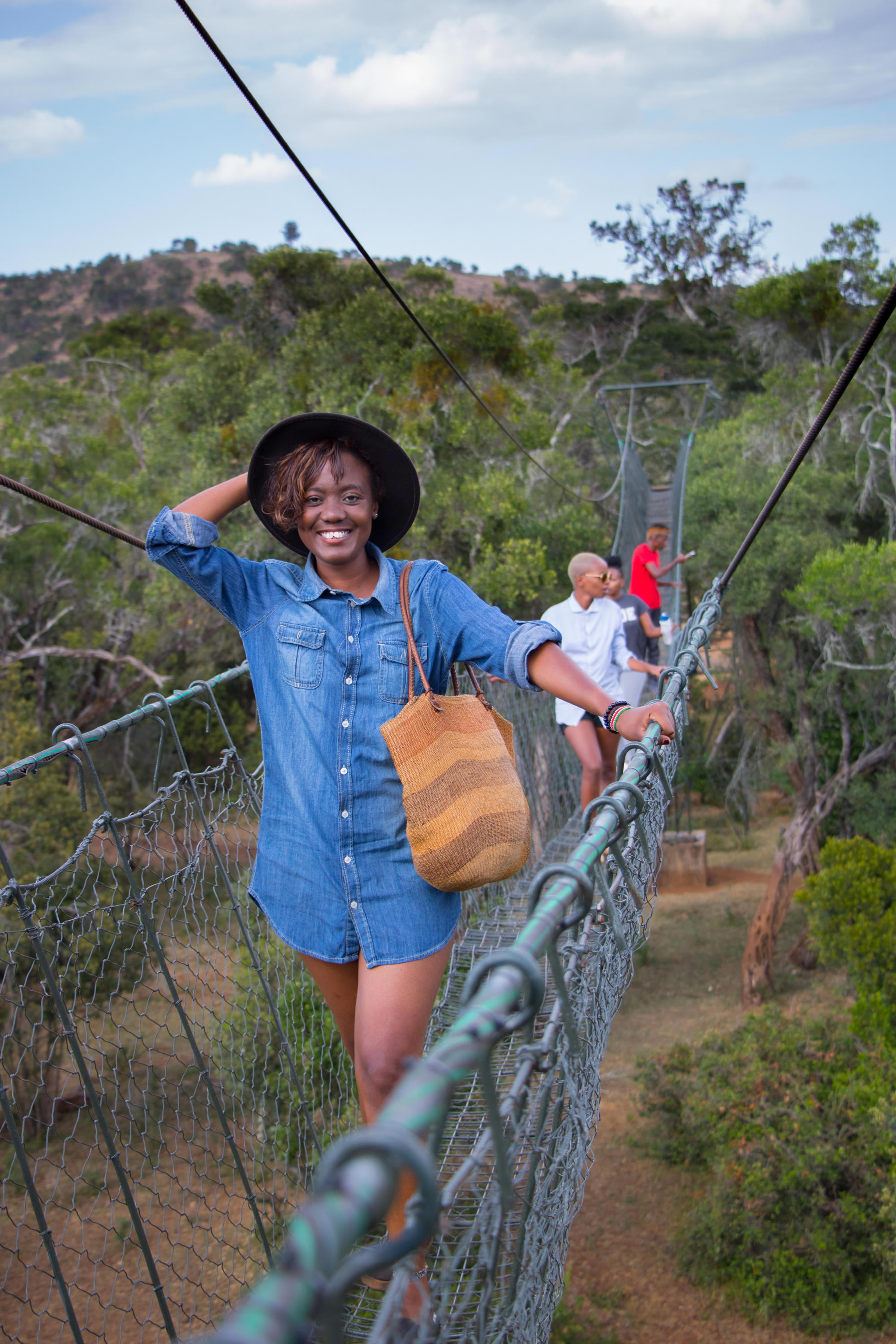 If you’re as impatient as I am, lead the pack- even though you have no idea where you’re going- and once you get to the end of the trail; allow yourself to dream of camping there (even though my scared ass would never).

Ngare Ndare is gorgeous, there’s so much effing nature out there- like that dude from Breaking In would say- but I still want my Mutua-Matheka–in–a-field–of–canola shot. Next year maybe.

Costs; 20 USD per person (To access the pools and the canopy walk)

How to get to Ngare Ndare, here’s a map. 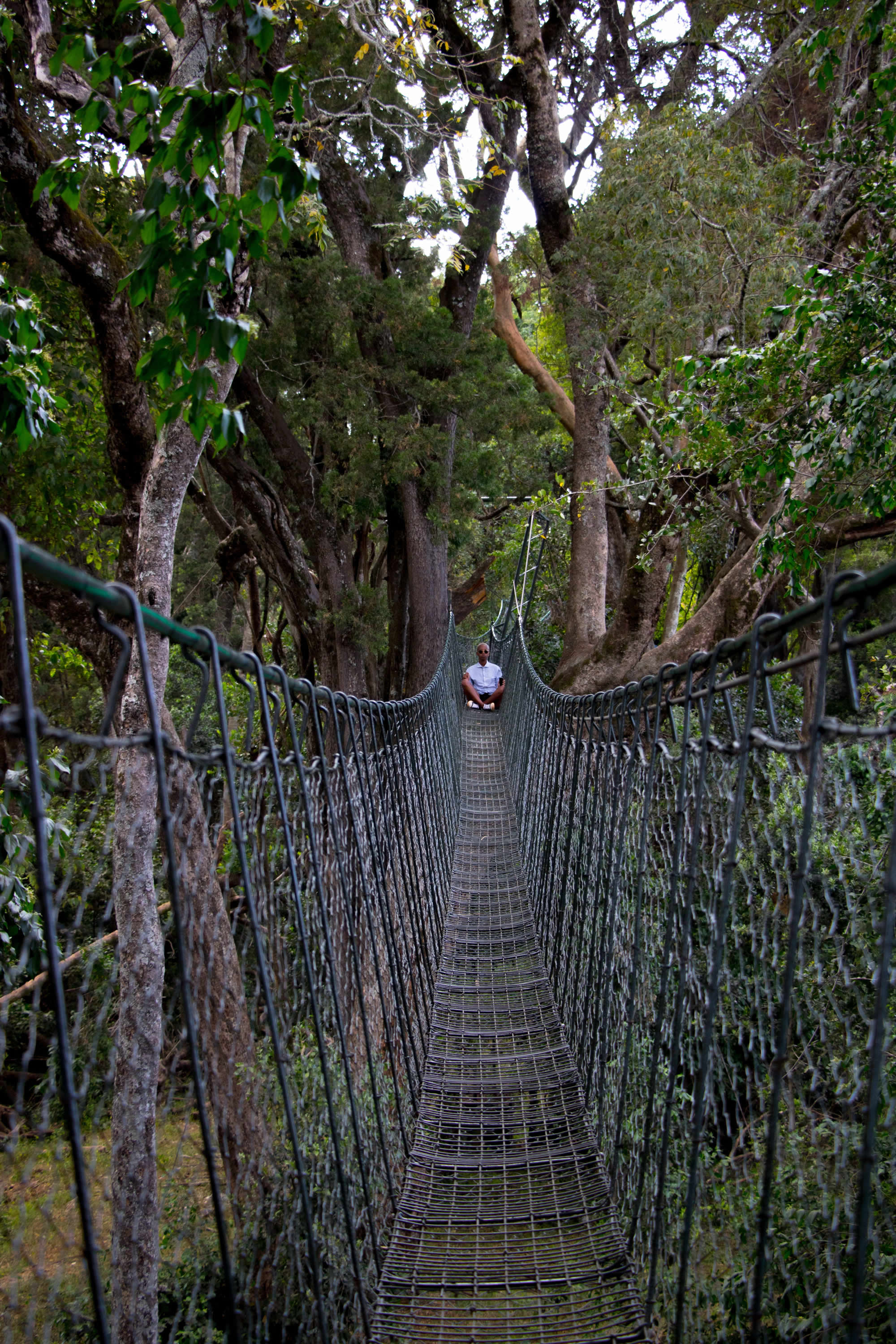 I'm trying to get into the habit of evaluating my month just as it ends and another begins. The result?  I hope to bring Taking ... Read more

I crave... A soft unwavering warmth Like the one you leave in bed when you have to wake up at 5 in the cold morning. ... Read more