Remember in late 2017, early 2018 when ‘shooting your shot’ was a huge part of pop culture? Well, even after that waned and the world moved to something, better, hippier… I still stuck with that particular trend. I am a huge believer in shooting your shot; if someone is seating at a table I’d like to be on, I ask if there’s space for one more. This is exactly how I ended up at Four Points JKIA, the first time.

Trevor, the uber talented photographer popularly known as The Mentalyst was shooting there over what seemed to be a stretched period of time and looking at his photos, I knew I wanted to explore the hotel, so I hit Trevor up. Coincidentally, he was also looking for a muse/model to shoot at Four Points JKIA and just like that, two days later, I was at the hotel, snooping around to my hearts content. Well, almost. 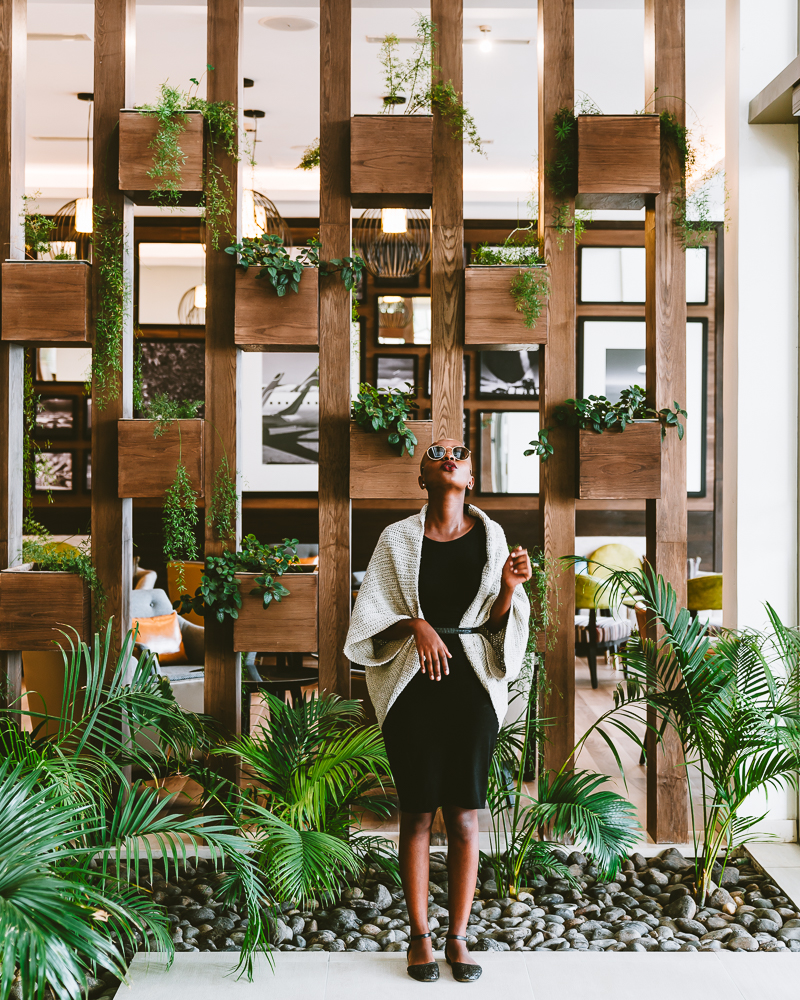 Four Points at JKIA has this beautiful hanging garden right at the entrance. It’s the most beautiful marriage between concrete and greenery.  If staring like an ob, the way I shamelessly did, is too shady for you, no judgement here, you can still enjoy the green without hurting your neck as you walk into the reception area. There’s little that can be said about reception areas, if we’re being honest, but… my 25th birthday is coming up in like 3 months and going by the way I owned that seat, I think I deserve to own one just like it, just in case y’all anyone needs help picking gifts. 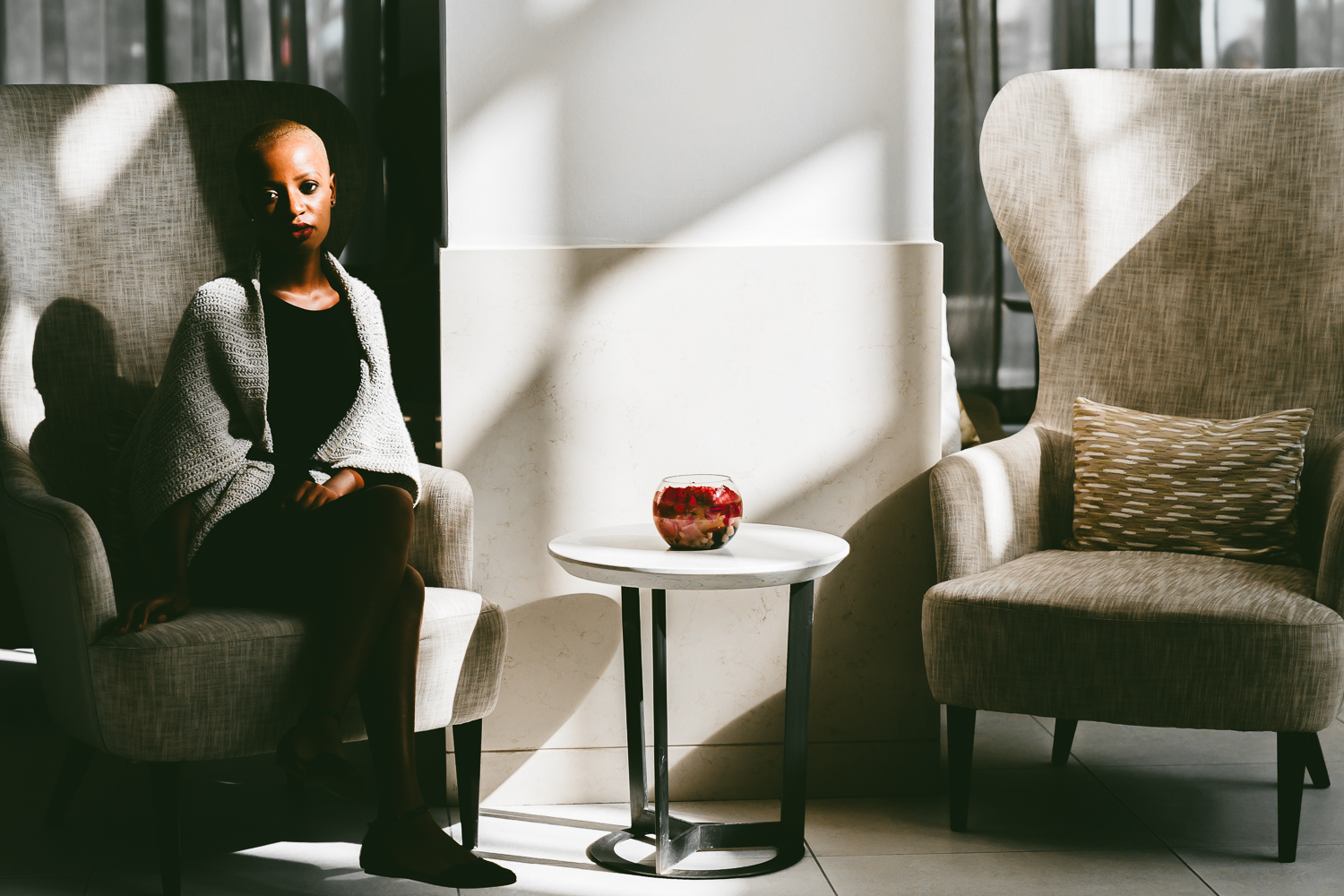 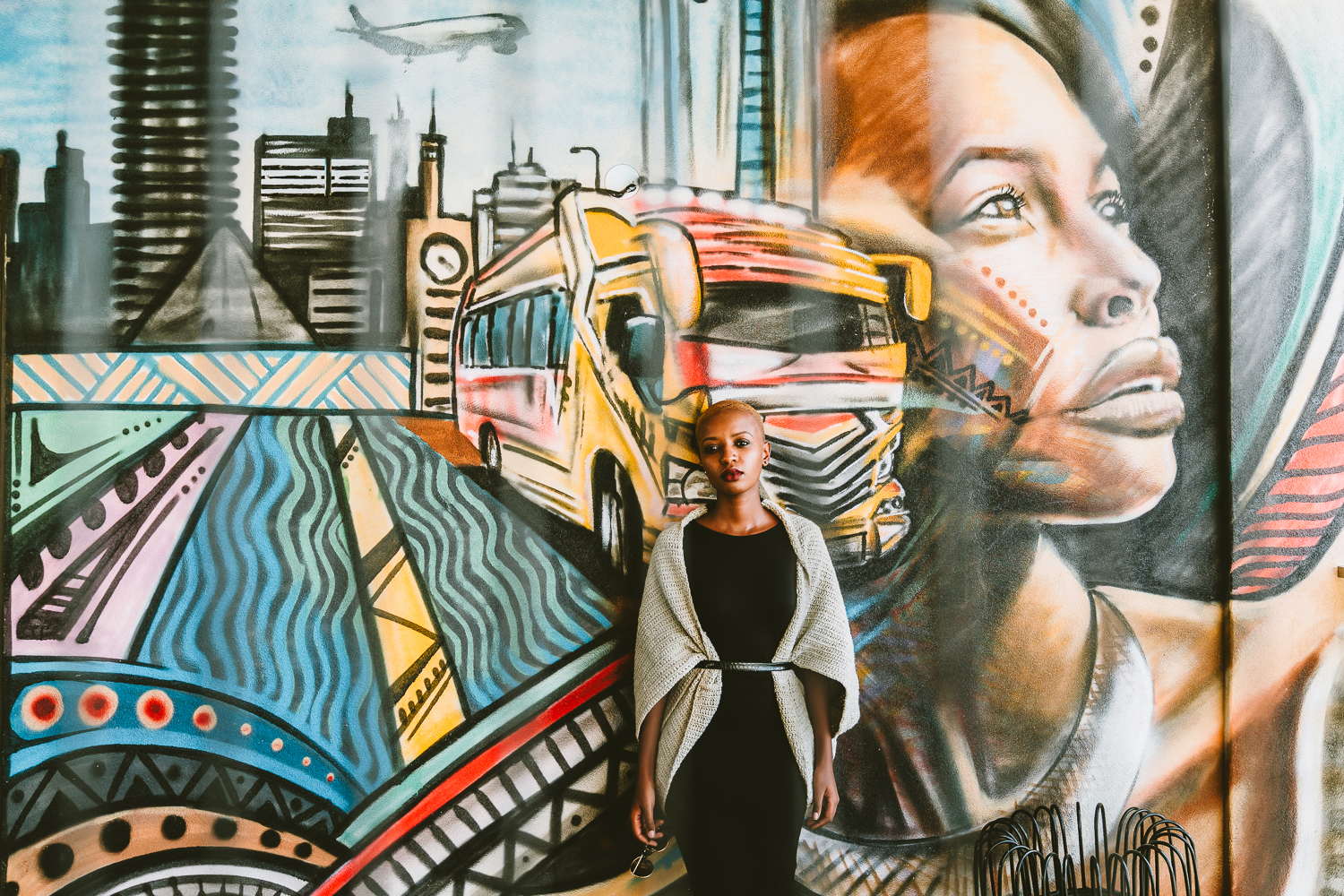 A couple weeks after shooting with The Mentalyst at Four Points at JKIA, I actually ended up going to dinner there, with friends. They have two restaurant options; The Marketplace on the ground floor and Tazama on the fifth. 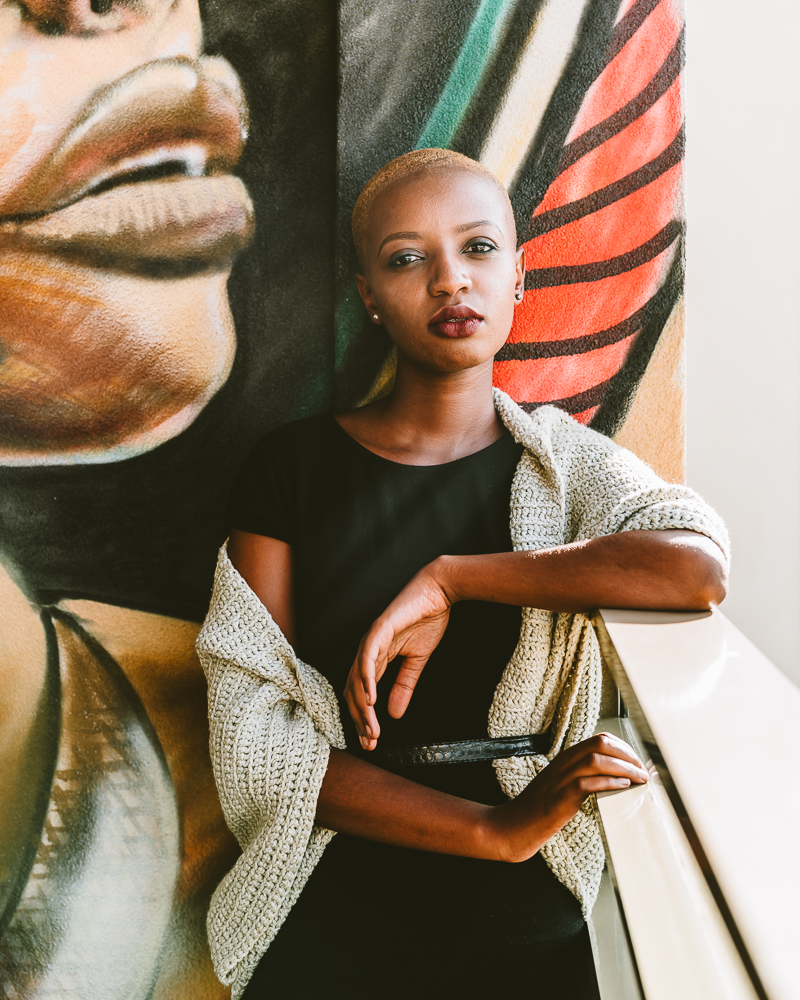 Tazama, like the name suggests, has an amazing view of the airport on on side and the poolside is right next to it. beyond the pool, is a stretch of grassland. There’s a beautiful mural by Bankslave and if you know anything about the Nairobi graffiti scene, then you Bankslave is literally a beast; his work speaks for itself. Tazama is really more of a bar area than a restaurant. Their menu is therefore a little limited and as my friends and I found out, it gets a bit windy/chilly at night. To combat this, at night the view is also obstructed, so if you want the view, go there during the day and if you’d like to dip in their pool, they charge KShs 1,500.

Now, the Marketplace is where the real dinner party is at. The menu is hella extensive, the drinks are on the right side of strong and I am in love with their mashed potatoes with rib eyed steak, so much so, I hate myself for not taking decent photo at dinner. But EatOut should be able to help you with that. Most of the items on the menu, are in the KShs 1000 – 1,500 bracket and they have a bit of everything; from Thai to Indian cuisine.

If you’re there during the day,  have a gorgeous area outside that you can make good use of. 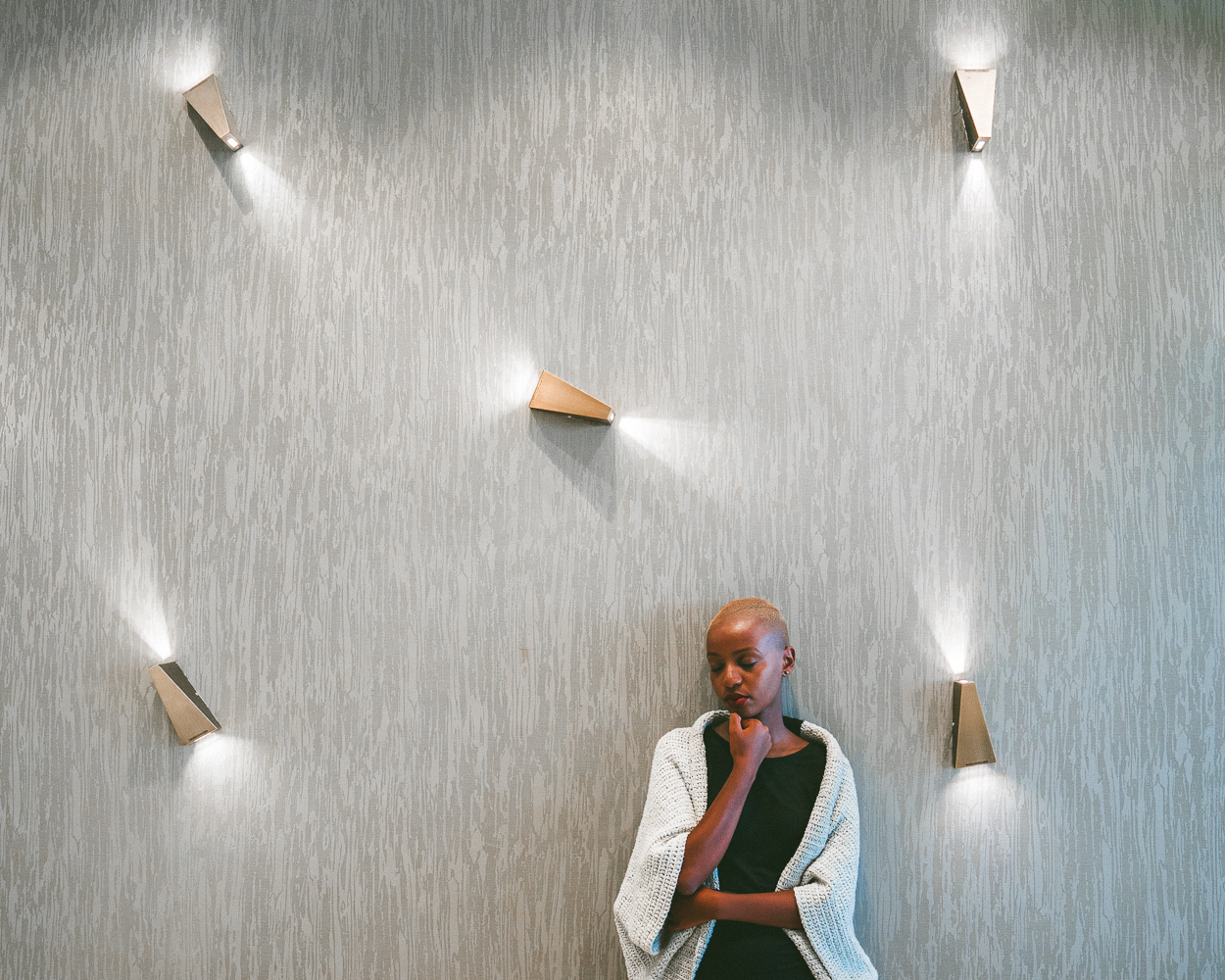 The Marketplace at Four Points at JKIA is open 24hours, each day and you don’t have to be staying at the hotel to dine at either of Tazama or Marketplace. Like the name suggests, the hotel is right inside the airport, about half a kilometer from the terminus but if you’re going there from without then there are two options; using a jav or cab/private car. If you opt to use the latter then Google Maps is your friend but should you opt to jav; get the Airport javs at the Ambassador stage in CBD. They ply the Mombasa Road route I believe, once inside the airport,alight just after the first roundabout, the hotel is about 200meters to your left. (With very clear signage.) 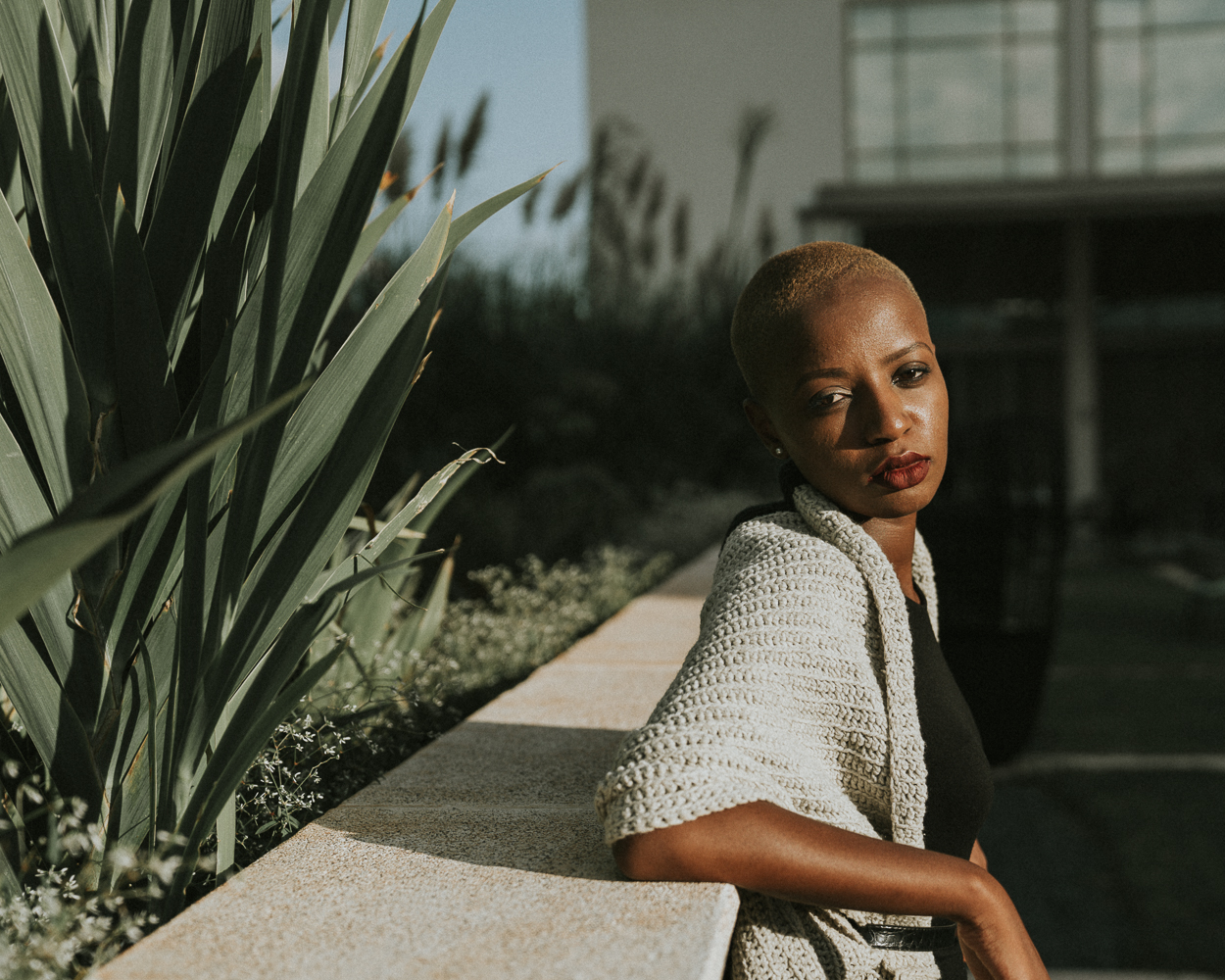 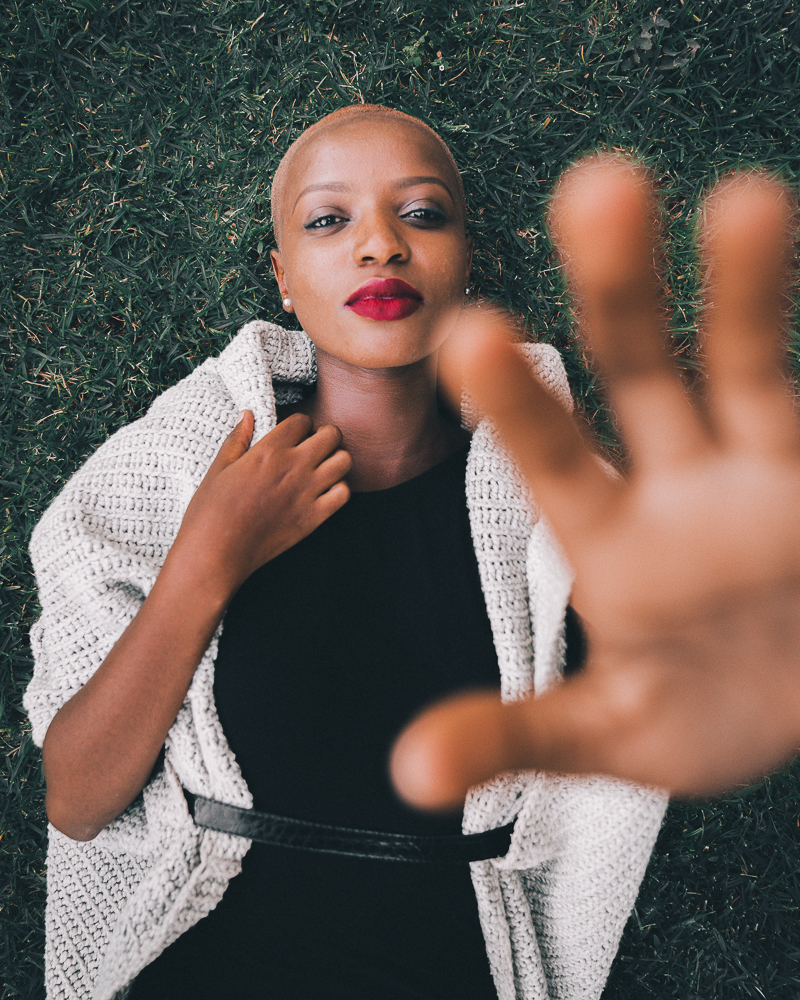 A little play in the grass hurt no one, right?

Taking Stock here for the first time in about quarter. Not much has changed, well, if you over look my niece’s influence on my music ... Read more

When you first cut your hair, no one prepares you for the cutlife and the madness that comes with it. Instead, they make jokes about ... Read more